Written by lgsadmin on 22nd November 2017. Posted in Latest News

LGS Port Talbot recently received an unusual phone call about a grey seal pup that had become trapped by boulders on Aberavon beach. 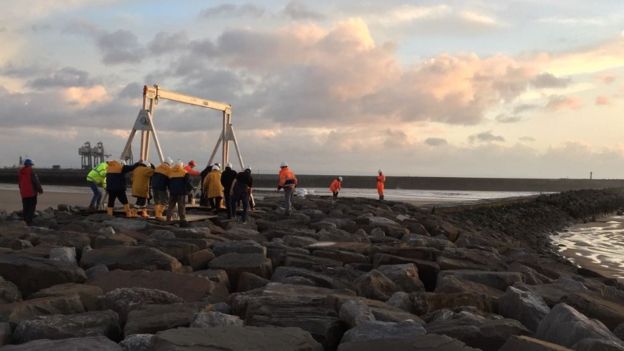 The seal had managed to wriggle in between a gap in the rocks and had been unable to free itself.   The team at our Port Talbot depot responded quickly to the urgent job and suggested a method using an aluminium gantry, chain block and strops.

In double quick time the equipment was on site and erected to start the complex rescue of the distressed pup by members of the seal rescue team.  The combined effort  by numerous local companies and bodies continued as darkness fell and the operation entered its final stages.   After removing a large 1 tonne boulder the seal, nicknamed Miracle, was freed and a welfare assessment was carried out by an RSPCA inspector.

Thankfully Miracle appeared unharmed and was transferred to a wildlife centre in Somerset to compete her recovery.  It is thought she will spend at least a month at the sanctuary before being released.